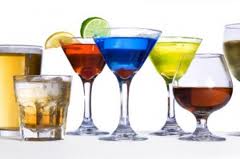 Blood alcohol content depends on the amount of alcohol consumed and the rate at which your body metabolizes alcohol. Alcohol is metabolized at a constant rate. No matter what you do—the idea that eating or drinking water after you’ve been drinking sobers you up is a myth, although eating or drinking water before or while you drink can affect your blood alcohol concentration. Factors affecting blood alcohol concentration include the alcohol content in the drinks consumed, body weight and type, rate of consumption, time elapsed since consumption, gender, food, medication, fatigue, overall health, and tolerance. The biggest factor, of course, is how much alcohol you consume. So, what’s in a drink?

Generally, one standard drink is 0.5 oz. of alcohol, but serving sizes rarely equal exactly one “standard drink.” For example:

A good rule of thumb is that your body will metabolize (e.g., eliminate) one drink per hour. If you drink three drinks within an hour, you will reach a higher BAC than if you spread them out over three hours, but either way it will take your body about three hours to metabolize those three drinks.

For DUI purposes, the question is when do you reach .08% BAC? The factors discussed here can make a considerable difference, however, generally the following is true:

You can wait out the effects of alcohol, but sobering up may not occur as quickly as you think—or as quickly as time seems to pass after you have had a few drinks. Healthy people tend to eliminate alcohol in the body at a fairly constant rate of one average drink or 0.5 oz. (15 ml) of alcohol per hour. The rate at which the body metabolizes tends to diminish with age. Depending on liver health, people who drink regularly or drink large amounts of alcohol may metabolize the alcohol more quickly because their livers have more of the enzymes that break down alcohol.

Other factors:
Medications frequently affect blood alcohol concentration because they are metabolized in the liver by the same enzyme pathways that metabolize alcohol. In other words, the enzymes that would normally metabolize alcohol are otherwise occupied metabolizing medications, therefore, the alcohol stays in your system longer and the result is that you have a higher blood alcohol concentration. This is true even for over the counter medications, including acetaminophen (Tylenol). And if you take Tylenol after drinking, such as to sleep or lessen the affects of a hangover, since your liver enzymes are prioritizing breaking down alcohol, the Tylenol remains in your liver not getting metabolized and causing damage to your liver.

Fatigue generally does not directly affect blood alcohol concentration—unless they affect the amount of water in your body, such cause as dehydration—but it may increase the effects of alcohol and thus contribute to a DUI citation Even though your blood alcohol concentration is not actually higher, you may be more prone to driving erratically and being cited with a DUI than if you had not been fatigued.